What's around the Ask Cozy Rooms and which places you shouldn't miss visiting in the city and close to it.

The airport is just 10 minutes from Ask Cozy Rooms. It serves local and international flights to European countries. It operates 24 hours as a passenger and freight station and it has 14 aircraft parking spaces of all sizes. Access from our facilities to the airport is possible either by bus, taxi or by car.

You do not need even a five-minute walk from Ask Cozy rooms to go to a place that has it all. Whether you want to eat something, drink a good coffee or have a drink (or more, you can walk back) or shop, Thessaloniki’s largest shopping center is just at the opposite side of the road. It has cinemas inside, cafes, restaurants and fast food shops, patisseries, electronic games and of course, stores that cover the whole spectrum of the market (clothing, electronics, home, etc.). And if for any reason you want to go there with a car, there is a huge parking space, places for people with disabilities as well as infrastructure for wheelchairs.

It is the biggest and most reliable Group providing diagnostic and hospitalization services in the wider Balkan area, comparable to those in Western Europe and the USA. The Group owns 8 ultramodern clinic facilities, with 1200 beds, a network of 2800 reputable doctors and 3000 full-time employees.

Welcome to the most exciting, frantic theme park in Europe! Get ready to enjoy swimming pools, slides, toys and dozens of amazing activities for all ages. Waterland is one of the largest water parks in Europe with an area of 150,000 m². Open from June to mid-September.

For those who dream of a trip to space or to the bottom of the ocean, we have good news. The state-of-the-art planetarium and a state-of-the-art virtual reality simulator offer space travels and wanderings in the oceans. The premises of the Center also include Broad Screen Cinema, Technology Park, Demonstration and Experimental Hall, Technical Laboratories, etc.

One of the largest and most luxurious casinos in Europe. It is located next to the International Airport “Macedonia”. The casino accommodates over 60 board games including Blackjack, Roulette, Baccarat, Poker and the stunning Punto Banco, which for those who are not aware of, is one of the most popular variations of poker. It also has the largest range of slots in his halls. Their number is now over 900. The ones who want to take part in the casino games must have reached the age of 21, otherwise they will not be allowed to enter. For the registration of new members, the demonstration of the Identity Card is needed. It´s an obligatory procedure required by the Greek Legislation.

It is just a 5 minutes distance from Ask Cozy Rooms. Its total area is 15,000 sq., divided into 4 levels. More than 80 single brand or multi brand individual stores await you to fulfill your every need. You will find clothing and footwear for the whole family (men, women, children), accessories, cosmetics, perfumes, underwear, optics, jewelry, watches, bags, travel items. Of course all these… at Outlet prices, which reach up to -70% of the initial price, all year round!

The American Farm School is the premier institution in southeastern Europe for education and research in agriculture, food systems, environmental studies and other life sciences related to our sustainable future. The School’s campus farm—producing premium milk, yogurt, Omega-3 eggs, turkeys, wine and more—serves as a living laboratory for hands-on education and applied research. The School’s extensive scholarship program provides promising young men and women with an unparalleled education that leads to productive careers and sustainable communities. You can visit the farm of the school or spend a truly special Sunday morning taking part in the activities organized by the school for its guests.

The largest theme park in Greece is located almost next to the “Ask Cozy Rooms”. It’s a five minutes’ walk to an amusement park and there you will be able to see your fishing abilities, you can practice in snorkeling, dredged boats, virtual football, and much more. The youngest park visitors can have fun in Elephantakia (flying elephants), Mini Carousel, Baby Cart, Bumping Boats and other imaginative activities. In the park there are dining areas, as well as a specially designed playground. For daring visitors , there is the Flash Tower (free fall of 40 meters), 4G (acceleration 4 times the force of gravity), Montana (high speed roller coaster) and Crazy Dance (crazy spin) ,while for the less daring Carousel, Panoramic Rode, Conflicting and Ghost Train. 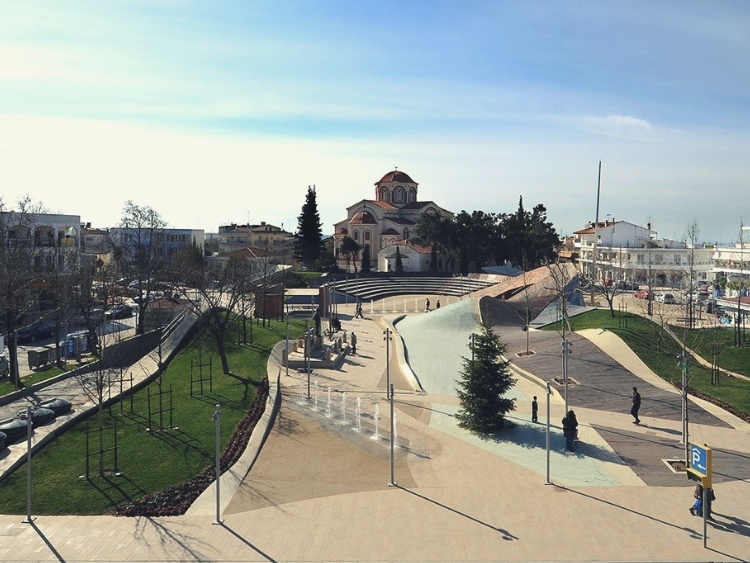 Thermi is the Municipal Section that Ask Cozy Rooms belong to. The city of Thermi has developed rapidly over the last 20 years. It is a modern urban settlement where one can find everything. There are many shops, cafes and restaurants, public services and banks ,the headquarters of many large enterprises and of course natural recreation areas, including its Dam, a place that besides its environmental interest also hosts many cultural events especially during the summer (concerts, theaters, festivals, etc.).

The Dam of Thermi

A small unimaginable miracle next to Thessaloniki, a small “paradise” next to the city and even closer (10 minutes by car) to Ask Cozy Rooms.

If you want to relax into the nature, it is your closest destination. The dam that forms a beautiful lake is surrounded by trees and it houses birds, turtles and frogs. In thearea there is a café where you can snack or drink, there is a playground, a picturesque platform that enters the lake and allows you to observe birds and aquatic animals at a very close distance, a beautiful path ideal for romantic photos and observatories.

Other places you must visit

The City Center of Thessaloniki

Thessaloniki is the largest and most crowded city of Macedonia - Northern Greece, and the second largest in the country, after the capital of Athens.

The city of Thessaloniki has a fairly extensive center, which gathers most shops, public services, attractions and recreation areas. It’s area can be defined to the northwest of the Republic Square (also known as Vardari Square), Southeast of the University Campus, Southwest of “Leoforos Nikis” Avenue and Northeast of “Agiou Dimitriou” Street.

Aristotelous Square and Ancient Agora Square are placed in the center of the “Historic Center” and they are connected with the pedestrianized “Aristotelous Street”.

The square is a popular spot for tourists and locals, with many places where someone can eat or have a coffee and is a place for political gatherings and various artistic events.

Aerial view of the center of Thessaloniki with its most important points.

The Coastline of Chalkidiki

Shaped like Poseidon’s trident and sticking out into the Aegean Sea, Halkidiki is a treat for visitors. Lush green forests that reach right down to the beach; golden sunlight reflected in the turquoise waters; a traditional style with a rich gastronomic and cultural heritage. Endless coves, unique architectural sites, perfectly preserved Christian monument and a host of unexplored treasures all add their own rich touch to the unique canvas that is Halkidiki.